1988. My pre-school/kindegarten was the best. THE BEST. The pre-school had “grades” named after characters on Sesame Street: Count, Cookie Monster and Big Bird. This was my graduation from Big Bird to kindergarten. We also had proms where we dressed up all fancy and did the waltz and rode in a limousine. I think we had them at the Marriott near the airport.

2008. As I mentioned before, I taught English at Berlitz for a few months. One of my students was a Hungarian model who lived with her hotshot Hollywood boyfriend in a beach house on PCH. I only worked with her a few times as I found myself tiring of her inability to focus. Our first session, she was 20 minutes late and spent another 30 on the phone. Second session, she was on time but then spent 45 minutes upstairs “changing her bathing suit.” I had made up my mind that I was going to ask out after the third session when she abruptly told me that she and her boyfriend were going to Hong Kong and then Europe and would be back in November (it was August at the time) and she would be in touch. She never was. The housekeepers were really nice and we watched novelas together. 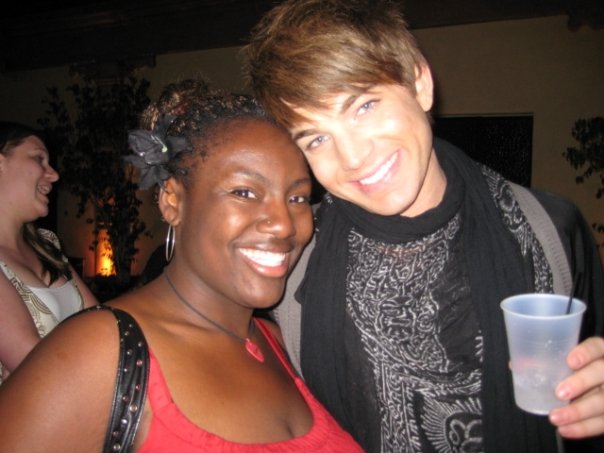 2008. My 25th birthday was one of the greatest experiences of my life. A college friend from Miami flew in. We saw Wicked and had the tickets purchased by one of the stars of the show so our seats were excellent. I had a party. We went to the Meg ‘n’ Sho Show (cabaret-style revue done by Megan Hilty and Shoshana Bean) the next day. We ran into someone I had worked with before on another show who was in the Wicked cast and he then introduced us to everyone. Megan (my favorite G(a)linda after the original, Kristin Chenowith) personally sang me happy birthday. I danced and sang with Adam Lambert (above). And strangers bought me shots of Patrón. (Then a couple days later, Michael, the guy I knew in the show, gave me a backstage tour and I damn near died, in a good way.)

2008. A friend of mine used to work at Fuel TV which meant that I got work a Red Bull pre-X Games party. I watched the X Games on TV for the first time in 2004 and, not counting this year, I have gone every year since, so to say I was excited is a bit of an understatement. Shaun White, and his friends, were so chill and I think we ended up hanging out with them for like a half-hour or so.

If I were a lesbian polygamist…

2005. The first time I met Rachael Yamagata I told her that her voice sounded like a honey-flavored shot of tequila. I have no idea where that comparison came from. It just sort avalanched out of my mouth during a meet-n-greet at the El Rey. So the second time I went to see her, with my friend Evan, I thought that it would be a cute callback to bring some honey and one of those airplane-size bottles of tequila. To make a meandering story direct, the show sold out before we got there so Evan and I wandered around Hollywood and on the way back to the venue, the bottle fell out of my purse and broke. We did get to see her (obviously) and laugh about what had happened. So in the picture, what I’m holding are shards of glass and a packet of honey I’d gotten at the LMU dining hall that afternoon.

2006. I still have the ticket stub from the first date I went on. (Yes, 2006.) It was 8 hours long. We hung out at the beach, ate, went to the movie. We went out one more time a week later and had an alright time…then things got so (I can laugh at this now) unbelievably bad. Bad like a screaming match on 2nd street in front of a really nice hotel (me. screaming.) and me carrying a letter of terrible things I wanted to say to him, in the event that I ran into him bad. Eventually, everything got straightened out and we’re totally good now. He moved to New York for his modeling career but we always get together whenever he’s in town. I’m actually thinking of asking him about working at his stepdad’s eco-resort–in Bali.

2010. If only it were in sharp focus! (Is that a metaphor? I don’t know. Maybe.) So, speaking of dates, Mike took this picture on our 3rd while I was doing samba with the Brazilians. An aside about that, I really am grateful beyond words for meeting them because it was pretty quiet before that. Anyway, I spent that day on the worst hike ever (I didn’t even blog about it, it was so bad) and then getting over the worst hike ever with one of the best desserts ever at Death By Chocolate with one of my roommates. After that it was time to dance–I really don’t know how it was still in me to dance after hiking. I guess I really did become Brazilian. Mike came out to see what all this samba business was about and, after meeting some of my friends, offered to play photographer so we could all dance together.  I love this picture because this is exactly what it felt like to be in that moment.