I was looking for this picture of my grandfather and I at my college graduation. I couldn’t find it but I did find this letter from my brother. Given the reference to the Golden State Warriors–I was a part of a group that danced at one of their halftime shows–I’d say that I was 13 and he was 20, so 1996.

Lil sis whats up! I got your letter the other day, I was happy to hear from you and know that you are still progressing in school, because education is the most important phase of life, its a opportunity to shape your future. It seems you have a very bright future ahead of you. As for me Im maintaining, staying out of trouble and trying to earn my G.E.D.

I still have “15” months left, so I have ample time to better myself mentally and physicaly. Im still writing my raps and studying the dictionary to inhance my vocabulary. Hopefully with a little hard work  I might luck up on a record deal, but as for now Im still making sure I have something to fall back on.

Being incarcerated has given me a chance to reevaluate my life style. I’d be a fool not to persue a healthier life, because only thing worse than being incarcerated is death. But anyway tell mom I said hy and I love you both. Im considering comming out to Cali after I get situated. I don’t want you to grow up without me being around to run your boyfriends away and get on your nerves.

I hope that you enjoyed yourself at the Warriors game that you participated in (send me some pictures). I hope you have fun and meet some new friends in your new neighborhood. Tell mom that Im asking if she could send daddy some money for me so he could buy me some shoes for my clothes package.

Tell your grandparents I said Hello. And make sure you write me back.

P.S. I use the soap, but I never drop it. And whats wrong with Bad Boy? 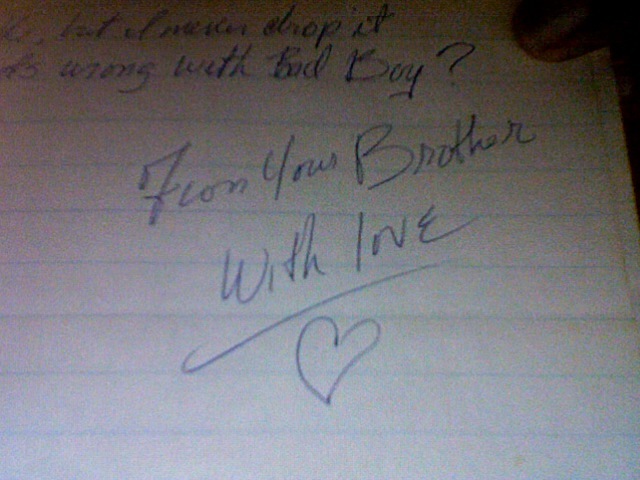 I haven’t seen this letter in years. I forgot that I even had it and then today there it was, out of nowhere. Samhain was yesterday and Día de los Muertos is today. Both traditions say that at this time of year the veil is lifted between this world and the next. I believe that could be possible. Maybe this is my brother’s way of reaching back to check on me? Reminding me of the brightness he saw 14 years ago.

He never did end up coming to California after he got out. Way lead onto way as it is wont to do. He met a girl, a brilliant girl who helped me with my AP English summer work of Macbeth and Hamlet, and she chose to go to school in New York, which, along with some other things, made the West Coast seem less and  less appealing. Three years later was the last time I saw him. Four years later he died, taking all my potential biological auntiehood with him. Oh well. I don’t like to dwell on what ifs because everything is only ever as it was.

At least on this side of the veil anyway.

There’s more that I could say about all of this but, as I remind myself often, no hay palabras para todo. There aren’t words for everything. But what there is is laundry to be folded, goals to be meditated on, prayers to be said and sleep to be gotten.

The day of the dead has ended and this night still belongs to the living.