Thank goodness I met Kavi at the Chile-Spain game because the line outside the Libra Room was something like a 1/2-block long, but as he, Chris and everyone else already had a table inside I got to VIP the line and cheer for La Roja in comfort. 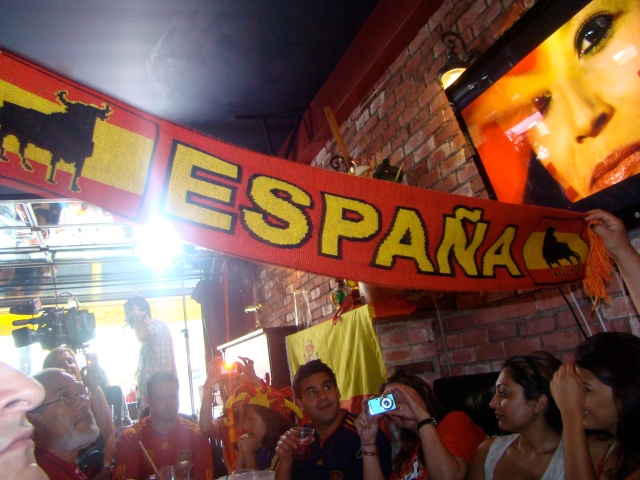 (Yes the CBC was there. I have been on the news/in the paper/youtubed more during the World Cup than I ever would have thought. You would think it’s intentional.)

Even though our section felt like a little Madrid, we were definitely outnumbered by Netherlands fans.

The game was looooong. Regulation time ended with both teams tied at 0. Thirty minutes extra time was added to the clock, two 15-minute halves.  Then, with four minutes left before they would have to go into a penalty kick shootout, INIESTA SCORED!!!!

That is Tatiana, who is Chilean but whose husband is Spanish. She was so overwhelmed that she was in tears for a good 10 minutes. 🙂

Obviously we were all very excited but still holding our breath that the Netherlands team could somehow get past Casillas before the 120-minute mark.

And then we partied in the streets until the cops dispersed us around 5p.

While out in the street I ran into Mike (but isn’t Miguel so much more fun to say? 🙂 ) whom I’d originally met at the Spain-Paraguay game, where we talked for an hour after he laughed at me being a bigger fan of [Fernando] Torres’ face than his feet. Whatever. It’s a good face! We hung out last night. Cool guy.

This is Ethan, who chose to display his affection for me by dragging me around by my skirt and trying to bite me. And anytime I tried to leave the corner he wanted to keep me in, “No! You stay here!!”

So I tickled him. A lot.