A Case of the Almosts

It was 2006, the year after I’d graduated from college. I had a degree in arts and no clue what I wanted to do with my life. One part of me wanted to go to grad school, study somatic psychology and become a dance/movement therapist. But another part of me knew that you couldn’t be a therapist and still watch The Hills. I also considered doing something to help put on the

but had 0 contacts and even less luck trying to make any. Physical therapy seemed interesting since I had massage therapy certification and am generally obsessed with how the body works but something about that was off, namely that it wasn’t entertainment, the not-so secret/not-so simple love of my life. I’d been around entertainment, be it performing/writing/directing/assistant stage managing, for about 10 years at that point but I could never let myself comfortably want it. It wasn’t “noble” enough I always reminded myself.

“Just give me something,” I thought. “Please universe, just give me a strong signal of what direction I am supposed to go in and I swear I will put everything I have into it. I just need a sign.”

Maybe a week or so later a friend posted a youtube video of “Defying Gravity,” a song I loved in my bones (and still do), which inspired me to check out the official Wicked website. Big news! They were planning to premiere an open-ended sit-down production in L.A.! My eyes widened, my breath caught, a switch was flicked inside me. This was it. This was the thing. This show–a show that I had never seen before–instantaneously became the single most important thing in my life. It consumed me. I had no idea what I could do or how; I only knew that I needed to be a part of it. I belonged to it. It claimed me. 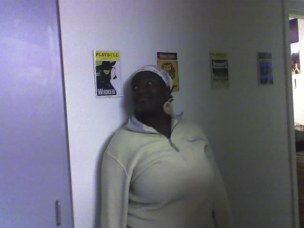 I knew that I wasn’t a good enough singer or dancer to audition (self-awareness is my anti-drug) but I did have experience working backstage on dance concerts in school. Maybe that could be my in! Almost immediately after that I saw a job listing for a musical theatre company in Long Beach. No experience necessary (and they paid $13/hr + overtime)! I got the job, quit the restaurant I was working at and became a stagehand. I couldn’t believe how everything seemed to be falling into place, and so quickly.

“When you want something, all the universe conspires in helping you to achieve it.”
-The Alchemist

I enjoyed the job but it turned out to be not exactly what I’d thought, i.e. I thought I was being hired to the company when it turned out that I was only being hired for the show, which had a 3-week run. It was likely that they’d hire me again but this was November, Wicked opened in February, and their next show wasn’t until almost March. Oh.

Not long afterwards I saw a Wicked-related job posting online. They needed a merchandise manager and, as it just so happened, I did merch for a local band. Perfect! (Well, let’s be honest: I didn’t think I was the most qualified but what I lacked in experience I more than made up for in unbridled passion for the show.) I applied and was told:

“The position for the LA WICKED Manager has been filled. However, we will be hiring sales associates for the show very soon, and appreciate you showing your interest for this position. I will hold on to your resume until we begin hiring for the LA sales staff.”

“Sweet! This is my in! Even though I have back-of-the-house experience I totally have a front-of-the-house personality! I could sell an atheist a bible I’ll be so good at this!”

It was December. I exhaled.

As January came and went, I started to get nervous. Previews began February 10th and I hadn’t heard back from the company. When was “very soon” supposed to be? How long was training? Why wasn’t I defying gravity yet?? I emailed and emailed. No response. So I did some searching, found the number and called the headquarters in New York. I finally got an email back:

“Thank you for following up with me regarding the Wicked LA position. We have filled all of the sales associate positions as of now but have kept your resume on record for possible hiring in the future. Again, I appreciate you following up and hopefully all is going well with you!”

It was February 9th.

Let’s just skip the part where I was completely devastated.

February 20th, 2007 was a Tuesday. A day that I had nothing to do so I’d told one of the hostesses at the restaurant I’d worked at that I would cover her shift for her. I didn’t really want to do it but, I needed the money and more so the distraction. “Besides,” I pep talked myself, this restaurant being in a very trendy, very rich, section of Santa Monica, “you never know who might come in.”

Enter Marc Platt ONE OF THE PRODUCERS OF WICKED.

“Did that really just happen?
Have I actually understood?”
-The Wizard & I

I recognized him instantly and was literally shaking. I knew that I had to talk to him but I didn’t want to interrupt his breakfast meeting and I didn’t know how to get across the everything of everything without seeming like I needed Ritalin, Xanax and jack & coke.

I felt like a previously infertile woman the first missed period after a miscarriage. I just needed this to be something so badly.

My now-or-never moment came just after he paid and was signing the credit card receipt (as if I needed more confirmation that he was who I thought he was).

“Umm, excuse me, Mr. Platt. We briefly met at Wicked Day last year–hi–umm, I was wondering if I could talk to you about something–I mean, not now of course, but maybe some other time a little later?”
“Oh yeah, sure. Here’s my email address. Just email me and we’ll talk.”
“Thank you. Thank you very much. I will.”

He and his friend left. And then I probably collapsed and had to be helicoptered home. I don’t even know. I can’t recall anything of the rest of that shift or how I arrived back at my house. I only remember sitting in front of my computer trying to figure out what combination of consonants, vowels and punctuation would show how much I wanted this but also that I was a responsible adult who deserved to get it.

I poured my heart out, closed my eyes and hit send. I kept my fingers crossed. Lit candles. Tried to stay in grace and gratitude. I counted my blessings, lost track and counted again. On March 9th he wrote back:

“Yes   got your email and thank you.  Unfortunately, there are no openings on the WICKED staff or otherwise at this time.  I will keep you posted as things are always changing and something may arise in the near future.”

Let’s just skip the part where I was terribly disappointed.

I thanked him profusely and emailed him once a month for about 5 months.

No job ever came up.

A former twentysomething with a head full of curls and heart full of questions wondering: when we get to nirvana, will there be food?
View all posts by J. →
This entry was posted in Uncategorized and tagged about a girl. Bookmark the permalink.

1 Response to A Case of the Almosts